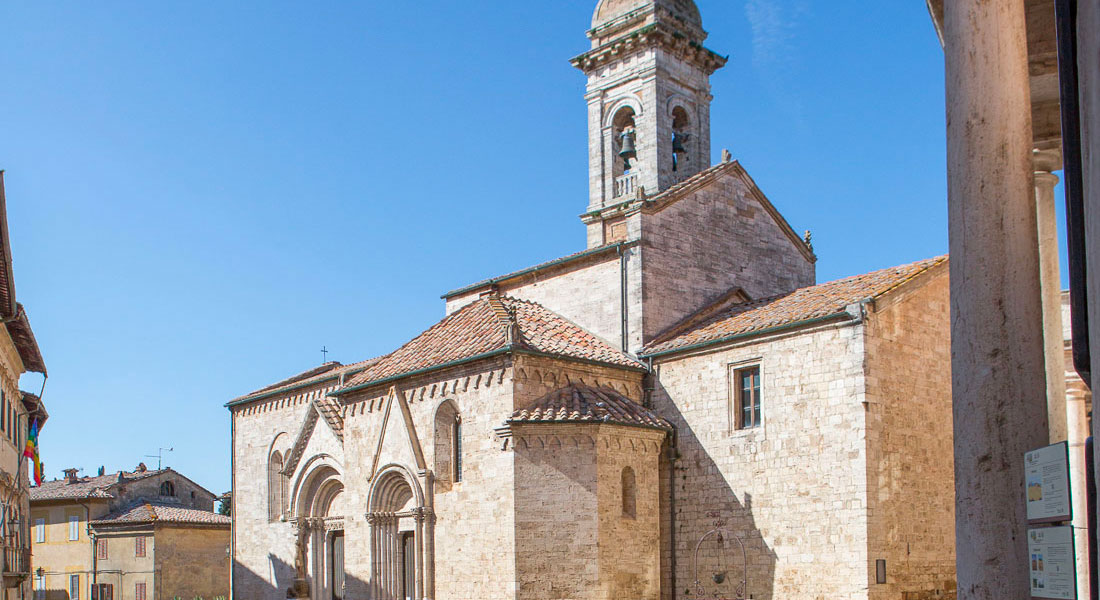 A visit to the churches of San Quirico d’Orcia

In place, such as this, where nature is at best, men have always found the divine spark. Maybe that’s why the Val d’Orcia has always been entrusted with higher missions, like hosting pilgrims and believers that were heading to Rome on the Via Francigena from all over Europe.

Traces of deep devotion are to be found everywhere in San Quirico d’Orcia through the great artistic masterpieces. Today we would briefly like to present our churches, small architectural gems.

One of the most ancient and most connected to pilgrimages, is the church of Santa Maria Assunta. It was built in 1062. It has a simple facade with a round-arch architrave portal.
The most important element from an architectural point of view, is the side portal, twin to the one in the Abbey of Sant’Antimo. Why twin? Maybe to let believers passing by understand they were on the right path.

The biggest and most important church in San Quirico is the Collegiata di San Quirico a San Giulietta.
It was built in splendid white stone, in the shape of a Latin cross and the mixture of Romanic and Gothic elements gives it its charm. The compact and solid aspect is softened by the many decorative details, like on the beautiful portal that has small columns, roses, the two inevitable lions and animal and plant motifs. The rose window presents “new” elements for its time, like the round-arch arches. The bell tower is also new.

On the side towards the square there are two portals dating back to the end of the 13th century, one was made by Giovanni Pisano and the other by Lorenzo Lotto, two great artists. They are certainly a testimony of how rich San Quirico was back in those days. We could continue describing the magnificence of the Collegiata for a long time, but we prefer to leave you the pleasure of discovering it for yourselves.
Very near to the Palazzo del Capitano, next to the “Antica Trattoria Al Vecchio Forno”, there is the Church of Saint Francis that, according to legend, was built when the Saint was still alive but in reality it was built later on, as we can see from its Gothic elements. Its aspect is composed and elegant with its bell tower. The Convent of the friars was also here once, but today what remains of it has become private residences.

Between San Quirico and Pienza there is a Chapel that deserves a special mention for the breathtaking beauty of the place in which it lies. In fact, it’s beauty deserves a wonderful exclusive excursion on foot or by bike. We are talking about the Vitaleta Chapel. It was built at the end of the 16th century. The Chapel is a single-hall religious building, with a small rose window on the facade and a bell gable at the back. It used house a statue of the Virgin Mary, attributed to the great Andrea della Robbia, which can now be admired in the Church of Saint Francis.

Now it’s up to you to discover these splendours in person!